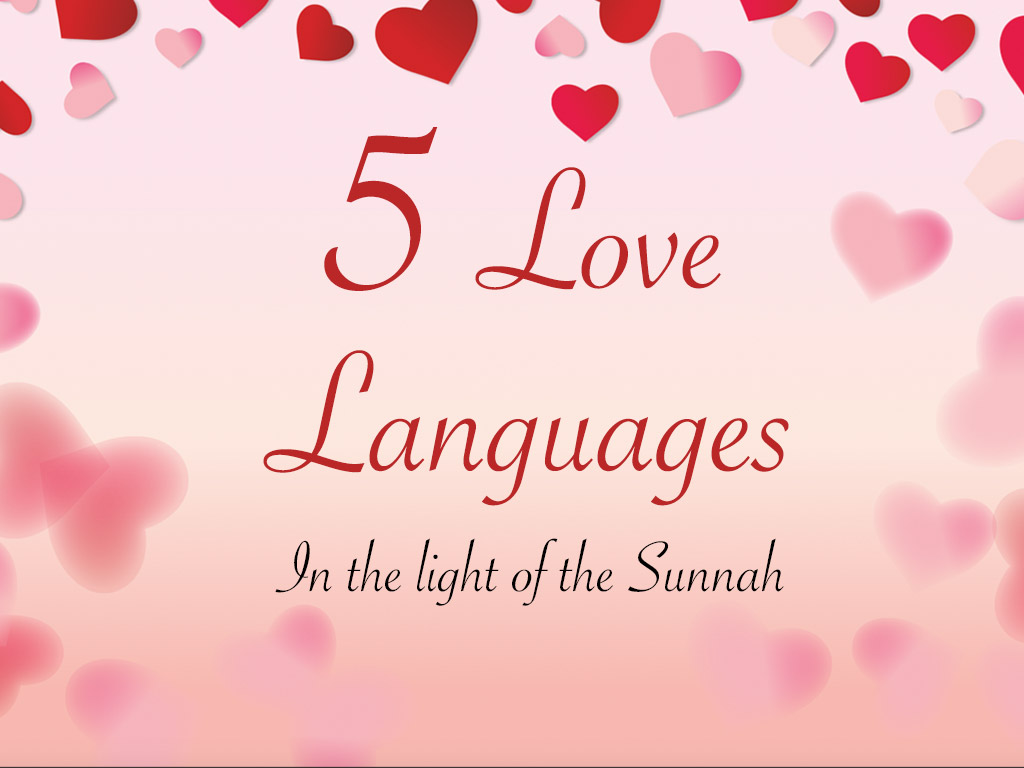 Love is one of the most used word in all languages yet it remains a very special one. Everyone aspires to love and be loved, to be regarded as important to the people that genuinely matter to us.. The Quraan depicts human beings as social beings in need of affection and love…

“The Five love languages” by Gary Chapman is a New York best seller that speaks about the different ways people express and communicate love. However, each one of us has a dominant love language in which we give and receive love in the best way known to us. The Five primary love languages are Words of Affirmation, physical touch, receiving gifts, quality time and Acts of service. Many a time, a husband may feel he is expressing his love through romantic words and poetry and yet his wife may not feel loved because maybe she feels loved when kissed and embraced.. hence it is important for couples to identify their own love language as well as their partners’ in order to make them feel valued and cherished in the relationship.

The love of Prophet Muhammad (PBUH) for his wife

Prophet Muhammad(PBUH) was very demonstrative in all forms of affection, be it to his companions, children, animals and most especially his wives. In his last sermon, he advised his companions:“ O People, it is true that you have certain rights with regard to your women, but they also have rights over you. Remember that you have taken them as your wives only under a trust from God and with His permission. If they abide by your right then to them belongs the right to be fed and clothed in kindness. Do treat your women well and be kind to them for they are your partners and committed helpers…” [Bukhari]. Once when asked who he loved most. He replied by :”Aisha(ra)[his wife] “Then who?” he was asked.. “Her father”.. He replied.[Bukhari]

In a society where women were considered the inferior sex and manliness was depicted primarily through aggression and oppression to those in less power, Prophet Muhammad(PBUH) was compassionate, loving and expressed romantic love openly. He was poetic to his wives and famously nicknamed Aisha(RA) as Humayraa(the rosy cheeked lady). The Prophet(PBUH) would praise his wife Aisha Infront of everyone, comparing her over other ladies as Thareed(his favourite meal) over all other dishes.[Muslim]. Of Khadija(RA); he said:” Her love had been nurtured in my heart by Allah.”[Muslim]. He spoke highly of her and her immense role in his life.. “She believed in me when no one else did; she accepted Islam when people rejected me; and she helped and comforted me when there was no one else to lend me a helping hand.” Words of affirmation are all words of praise, compliments, appreciation that express love and encouragement, that shows our partner how much we value them and affirm our support. In the day to day routine of life, such words spark life into a marriage and give meaning to the most mundane of activities.

Physical touch strengthens the emotional connection within the couple; whether it be simply holding hands, a warm hug, a passionate kiss or being intimate with one’s partner.. all of it convey “I LOVE YOU”. The Prophet (PBUH) would passionately kiss his wives before going for his prayers and when he would return home, he would make miswaak(brush his teeth) so that he could kiss her(narrated by Aisha(ra)) in Bukhari. The wife of the Prophet

Maymunah said, “The Messenger of Allāh

would be intimate with his wives above the izār (waist wrapper) when they were menstruating.” (Bukhāri). The Messenger of Allah (PBUH) was distinctly kind and considerate to his wives in public. Anas ibn Malik narrates: “I saw the Prophet (PBUH) making for her [Safiyyah] a kind of cushion with his cloak behind him [on his camel]. He then sat beside his camel and put his knee for Safiyyah to put her foot on, to ride [on the camel]” (Bukhari). All these demonstrate the consideration and respect the Prophet Muhammad(PBUH) had for his wives as well as tenderness which made him the ‘best to his wife’.

Receiving and giving gifts can convey love in a unique way. It does not necessarily mean diamonds and jewels every week but rather a thoughtful gift; be it a tool for his new project or a new watch or new hiking shoes or for her a sweet smelling perfume, a pretty summer dress, a form of technology to lighten her household tasks. Sometimes a gift can communicate love in ways words cannot express. You may know of the story of Aisha(RA) when she lost her necklace in the desert, which lead to an unjust accusation. The necklace was a gift given to her by the Prophet. It was inexpensive and made of stones but held sentimental value. Out of his pure love for his late wife, Khadijah (RA), whenever the Prophet (PBUH) slaughtered a sheep, he sent a share to her friends, long after she passed. A hadith narrated that ‘Aisha(RA) said: “The Messenger of Allah (PBUH) used to accept gifts and reward people for giving them.” [Bukhari]

1nikah is a free muslim matrimonial (nikah) website.
Register to find your soulmate !

Another way of expressing and communicating love is through quality time. Many a time, a man can spend hours with his wife but focussed on his phone only to have his wife complain he does not spend time with his family. This is because his wife requires his undivided attention i.e. his physical as well as emotional presence in order to feel loved. The Prophet (PBUH) led by example in allocating time to each one of his wives daily. This creates consistency and connection in the relationship and so that each wife feels loved and feels connected to him. A particular story of Aisha(RA) and the Prophet(PBUH) that illustrates the importance the Prophet gave to quality time, was when there was a fighting/wrestling event. Aisha(RA) wanted to see all of the excitement. The Prophet(PBUH) asked her to stand by him and watch closely with him. Standing behind him, her cheek touched his. Aisha refused to move because she wanted to stand there as long as she could to be close to him. The Prophet didn’t move, Aisha moved first.[ Ṣaḥīḥ al-Bukhārī 949, Saḥīḥ Muslim 892] This narration shows us how loving the Prophet was and how much he valued quality time. The Prophet Muhammad(PBUH) said: “When a husband and wife look at each other with love, Allah looks at both of them with mercy.” Hence, undivided attention is encouraged in our traditions.

In another instance, Aisha(RA) related to us: “(Once) I was accompanying the Messenger of Allah on a journey and we ran a race, and I won. Afterwards, when I had grown fat, we, (again), competed (with each-other) in a race, and this time, he won. Upon it, the Prophet remarked: “Now, we are equal.” {Abu Dawood}. This illustrates the importance of spending time and being playful with our spouse. Nowadays, couples wear themselves out throughout the year working to the bone and then once a year go on holiday and that is the only time they witness each other’s playful side. Quality time is very important on a regular basis, to connect on a deeper level, to speak of the daily emotional and mental stresses, to enjoy the beautiful family moments which is going to become the sweet memories of our children of their amazing childhood. It can be a monthly date as couple time or a weekly outing to somewhere adventurous and enjoying the wilderness of nature. Sometimes it can also be a financial splurge that can be budgeted for and creating new experiences for the family, giving the couple the boost to give off more of themselves with love in their daily activities.

Last but certainly not least is Acts of service, the fifth love language. Taking a little of the load off the shoulders’ of the other is certainly an act of love… The world has certainly evolved to a much better place with men shouldering a lot more of the responsibilities of the home. Women are certainly the nurturers of the home however maintaining a home and seeing to the comfort of each individual should not become the burden of only the woman but shared with love by the couple. Al-Aswad reported that he asked Ayesha (RA): “What did the Prophet (PBUH) do at home?” She said: “He used to be at the service of his family, and when it was time for prayer, he would go out to pray” (Bukhari). Ayesha (RA) is also reported to have said in another narration: “He acted like other men. He would mend his clothes, milk his goat, and serve himself” (Ahmad and Bukhari). If the Prophet(PBUH), in spite of his responsibility as the leader of humanity in faith, being a political and military leader could make time to help in house hold tasks so can every other man! On the other side of the coin, a woman should embrace her role as the home maker and rule her kingdom with pride, ensuring the ambience in her home is warm, happy and inviting.

To conclude, Dr Gary Chapman has really helped in codifying the love languages so that we can easily understand it and put it into practise; however 1400 years ago, Prophet Muhammad(PBUH) already demonstrated the five primary love languages in his relationship with his wives demonstrating to us his example as the “excellent standard of character.”(Ch68: V4). May we use this example before us to nourish and sustain our relationships with our spouses and may we discover our spouses’ primary love language in order to convey and communicate love in the most beautiful of ways…INSHAALLAH.. Aameen!

Our Lord! Bestow on us from our spouses & our offspring the coolness of our eyes & make us leaders of the righteous.” Surah Al- Furqan 25:74

COMPATIBILITY WHEN CHOOSING A PARTNER

How to carefully select the ideal life partner

What does Islam say about NIKAH?